We’re coming up on Distracted Driving Awareness Month in April. Despite the fact that New England states banned cell phone use while driving in 2010, illegal usage is up nationally. According to a study by Zendrive, 60% of all drivers use their cell phones at least once while driving.  The study found that distracted drivers used their phones an average of 3 minutes and 40 seconds per hour. And auto deaths jumped between 2015-2016 to over 40,000 according to the National Safety Council, the biggest jump in 50 years.

The Massachusetts cell-phone use while driving laws were updated in 2017 to be even stronger. And in January 2019, Governor Baker called for another review to see if further changes were required to promote public safety. However, distracted driving encompasses more than just cell phone usage. So let’s take a look at the big picture as Distracted Driving Awareness Month approaches.

A look at cell phone use 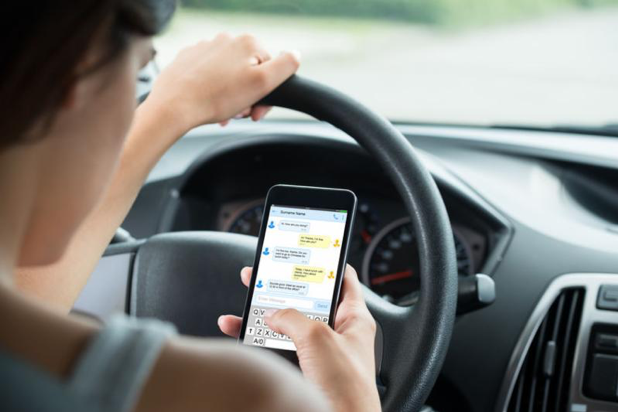 Between 2010 and 2016, the Massachusetts State police issued more than 10,000 tickets for illegal cell phone use while driving.  The fines ran from $100 for first offense to $250 to $500 for third time. These figures caused the State Legislature to tighten up the laws in 2017.

Drivers are barred from using their hands to make calls or send text messages.  Drivers can receive a citation for even holding their phone in their lap or near their heads.  The bill specifically bans the use of social media, email, and video calling systems while driving. The use of the smartphone’s camera is also prohibited. Of course, there is an emergency exception. If the driver feels they are being threatened while driving, they may call 911 for help.

Drivers are barred from using their hands to make calls or send text messages.  Drivers can receive a citation for even holding their phone in their lap or near their heads.  The bill specifically bans the use of social media, email, and video calling systems while driving. The use of the smartphone’s camera is also prohibited. Of course, there is an emergency exception. If the driver feels they are being threatened while driving, they may call 911 for help.

The real danger is in HANDLING the phone. This causes the driver to take his or her eyes off the road for several seconds.  And that’s where the trouble comes in, especially at 60+ miles per hour. You simply cannot react quickly enough to avoid a collision with an unanticipated “hazard”. 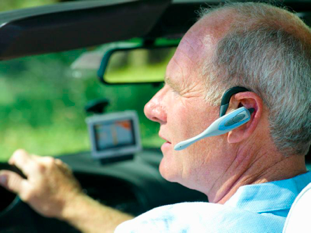 The safety organization, End Distracted Driving (enddd.org) points out that there are three types of driving distractions: Manual, Visual, and Cognitive.

* Manual distractions are those where you move your hands from the wheel,

* Visual distractions are those where you focus on your eyes away from the road.

* A cognitive distraction is when your mind wanders away from the task of driving.

Texting involves all three types of distractions, which is what makes it so dangerous. According to the National Safety Council (NSC), distracted driving crashes are typically under-reported but the NSC estimated that 27% of 2015 crashes were cell phone related. And yet, drivers are NOT taking this threat seriously enough!

According to the AAA Foundation for Traffic Safety, over 84% of drivers recognize the danger and find it unacceptable to text or send email while driving. However, 36% of these same people surveyed admitted to having read or sent text messages or emails while driving in the previous month. And of course, teenage drivers are the most prone to this behavior. The fatal crash rate for teens is 3 times greater than for drivers age 20 and over. And teens whose parents drive distracted are 2 to 4 times as likely to mimic this risky behavior.

What’s the biggest, most dangerous distraction of them all? Actually, it’s NOT cell phone use. It’s plain, old “daydreaming” behind the wheel, being inattentive because you are lost in thought!  So during Distracted Driving Awareness Month, we’d appreciate it if you could consciously try to put a little extra focus on the road while driving. It could just become a habit. And it could mean you don’t become a statistic. 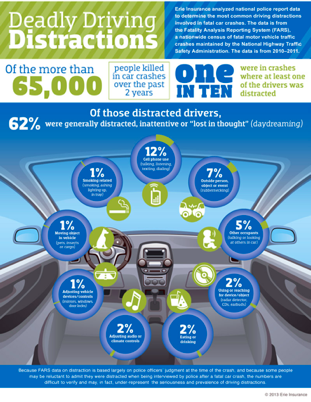 Can I use my cell phone while driving in MA?

MA is a hands-free state. This means that if you are 18 or older, you may TALK on your phone while driving so long as one hand remains on the wheel at all times and the device doesn’t interfere with your driving. If you have a collision, the officer could cite you for “Improper Use of a Mobile Phone by Operator”, making the assumption that the phone use impaired your driving. First offense is $35, and $75 for the second offense in a 12 month period.

What about an under 18 driver?

ANY use of a mobile phone while driving is prohibited for teen drivers. The only exception is the need to report an emergency. Use of a Mobile Phone/ Electronic Device by a Junior Operator comes with a $100 first offense fine, a 60 license suspension, and an attitudinal course requirement.

Can I text while driving?

Absolutely NOT!  Under no circumstances can you write, read, or send text messages while driving no matter what your age. THIS LAW APPLIES EVEN WHEN YOU ARE STOPPED IN TRAFFIC! First offense will cost $100, rising to $200 and $500 fines after that.

Can I check my phone for directions and other online information while driving?

Only if you have a hands-free navigational device that is permanently or temporarily affixed to your car. You may not check for directions from a phone that is loose on the passenger seat or in your lap. Similarly, if you need to check websites or emails to help you get where you need to go, you cannot access these screens while you are driving.  You will need to pull over in a safe spot, using your directionals, and park the car before attempting to find directions.

How dangerous is distracted driving??

Each year, more than 3,000 Americans are killed in crashes that involve a distracted driver. Roughly 400,000 drivers, passengers and pedestrians are injured. To put that in perspective, that is more than the population of Cleveland, Ohio!

What can I do to educate and protect my family from the risks of distracted driving?

First, be a good role model. Set an example for all the drivers in the family by obeying the law.

Second, talk about it with the drivers in the family.  This issue has lots of good info and facts on the subject.  Share it with all drivers.

Third, if your family members’ cell phones have the feature that automatically disables the smartphone while driving, be sure to enable it.

Fourth, talk about the other distractions that cause accidents: applying makeup, looking for things in backpacks or purses, eating while driving, tuning the radio, etc. And if you bring along a pet on rides, make sure it is secured in place away from where it can interfere with the driver in a crate or carrier, behind a barrier, or harnessed and tethered.

Take advantage of what Massachusetts has to offer!
posted at Jun 2, 2021

Time to review your home replacement costs in today’s dollars
posted at Jun 2, 2021